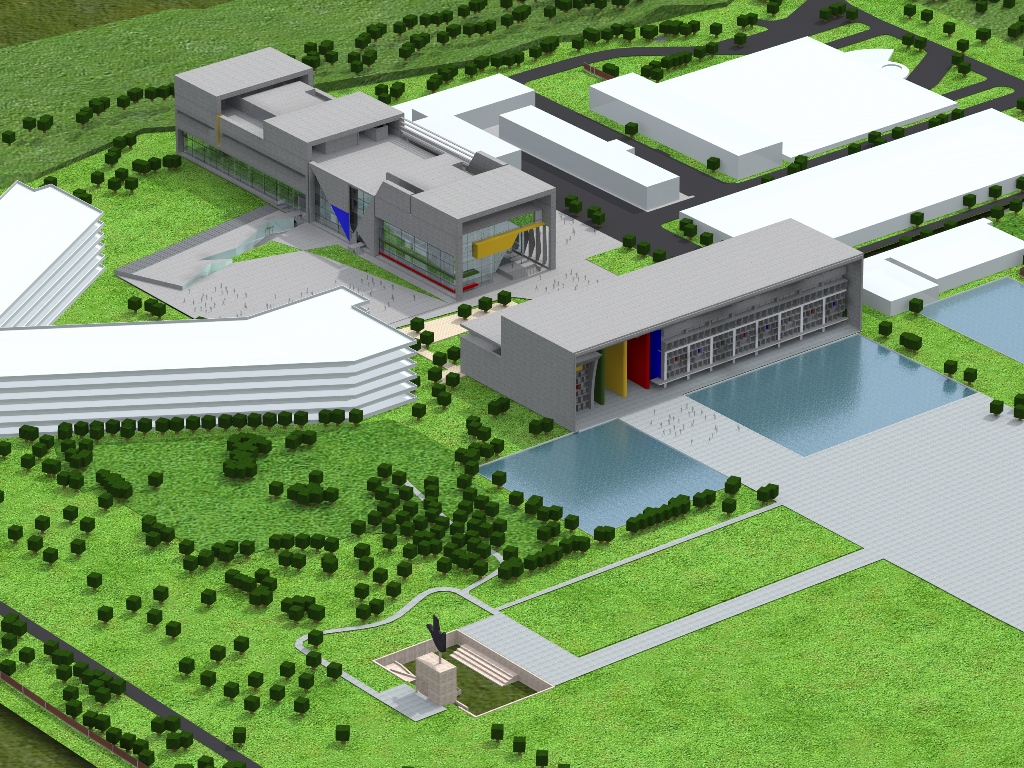 High court building in Chandigarh is the epitome of design by le Corbusier. The proposal given by the master architect is not just a beacon of forward march in construction technology for the India post independence but also catered effectively the environmental conditions by the use of external shading devices and parasol roof to protect the inmates of the building from harsh environment. The new building designed to cater the needs of future to be built at the rear end of the capitol complex is bound to get influenced by the existing one not just architecturally but also historically. The high court by Corbusier with its brise-soleils, parasol roofs, coloured columns at the entrance created a truly modern building and inspired future generations to create new things with this language.

Conceptualizing a new building in the backyard of the capitol complex and relating it with the iconic High court building in function does not result innovating much as far as design is concerned. The overwhelming experience of Capitol complex, its buildings, its history and its relevance to Modern India brings out a very subdued response for the outcome of the new building. Nevertheless an attempt has to be made no matter how restrained it is. The new building should be a new beginning for a modern developed India taking its inspiration from the old one, taking care of the context of environment, temperature controls etc but not be a mere replica of the old building. The language given to us by the master architect has been transformed in this building to a newer concept. The building derives itself from the old building yet it does not look similar, rather it projects a new India which is self sufficient, progressive and looking towards the future. 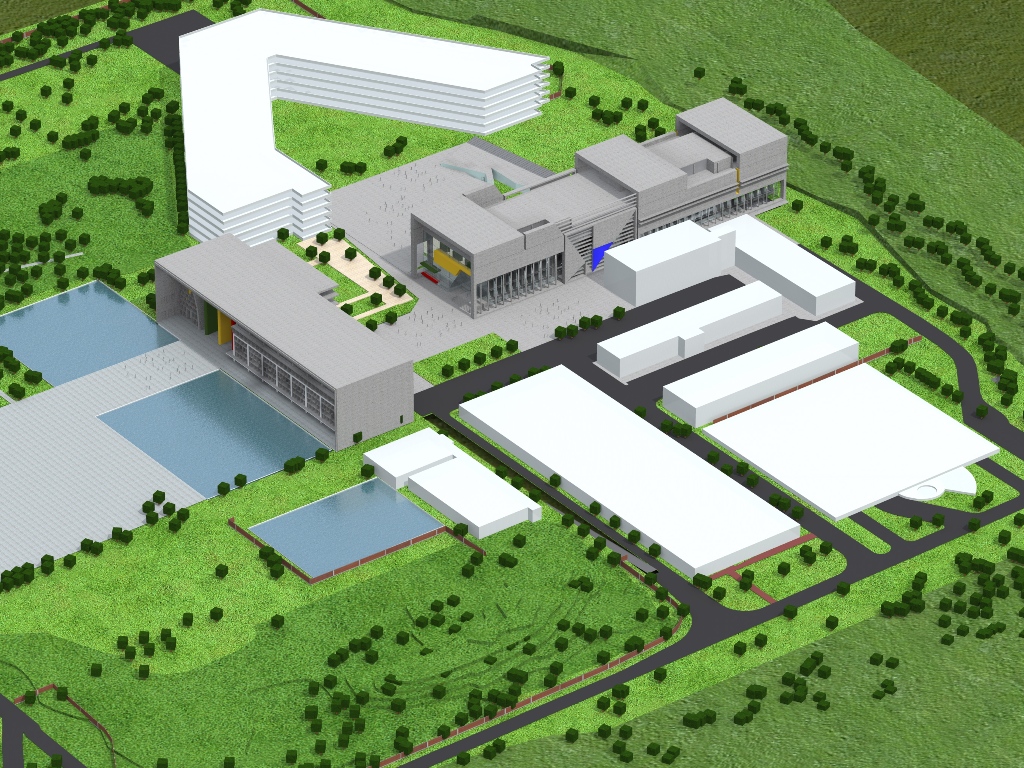 Using that language and other important philosophies we have a new glass building symbolizing a modern India covered with the RCC shading symbols reinvented through le Corbusier concepts. While designing the buildings in Chandigarh he maintained that the material used should be locally generated and not much foreign technology should be used in building them. RCC the main material which was used years ago still finds justification as the material to be reused because till this time the finishing has not been perfected in India. Also use of RCC directly relates the building with the existing monuments at capitol complex.

The plan has to be rectilinear preferably in proportion with the existing high court. No other plan form can be more justified in the capitol complex extension as a rectangle. The disparity of other forms would be detrimental to the existing forms in the complex and also will not be able to find its niche in this highly decorated and famous area. 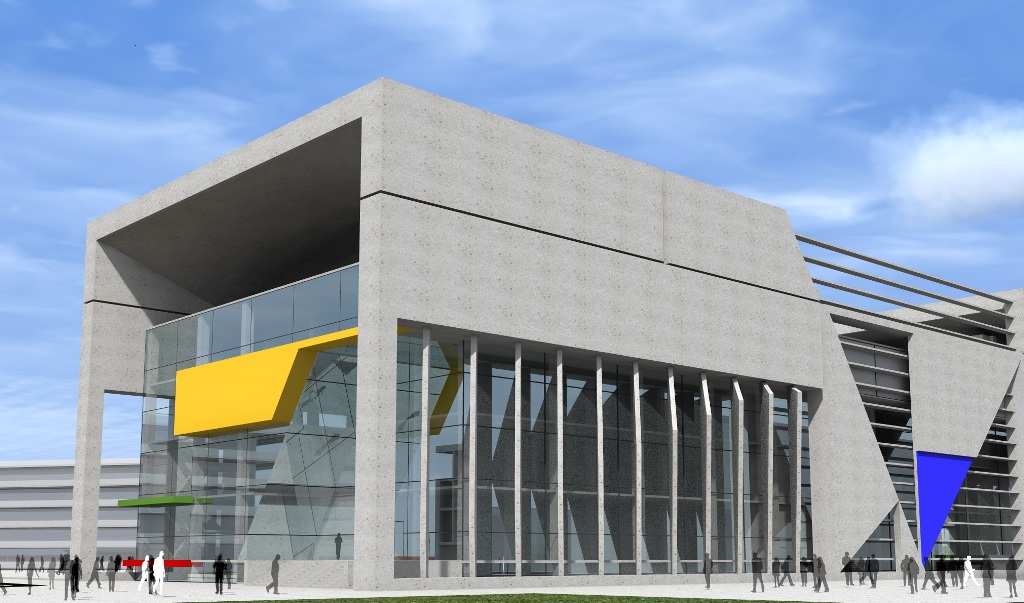 The vocabulary of the new building is extracted from the two tier roof system and the outer skin in the form of brise-soleils. Umbrella or the parasol is the most striking feature of the old high court building. The new building borrows the same parasol and puts it on top of its roof exactly parallel to the one in the older building with the difference that the view of the parabolic arch is single as opposed to multiple in the old building. The arch roof originates from both the sides of the building and forms an envelope for the protection of the glass building through harsh weather. 3 arches at various horizontal levels are placed on the roof of the building in accordance with the planning and usage of the building. These arches are integrated to each other and the main building through the binding horizontal RCC baffles. When viewed from the existing High Court Building these look one arch only and the longitudinal elevation does not reveal them keeping the sanctity of the form when viewed from the Capitol Complex. The parasol roof as in the older high court is kept as a separate entity as in a secondary roof, a deliberate attempt is made through the horizontal baffles to unite the lower part of the building with the head. From the sides, the building is divided into 4 blocks proportioned in Golden Rectangle where three rectangular frames are in form of a+0.61a by a and the last one finds the proportion of a by a. These rectangular frames are given to control the environment of the building in form of shading devices. The second frame is the most symbolic for the Public Courts building as the triangles taken to generate that block are inspired by Corbusier’s symbol for the high court with the three triangles. The two adjacent frames are bisected into two triangles with the golden proportion in a vice versa order with triangular columns forming the colonnade from front to the side entrance. Use of slits and jaalis form a tapestry in the façade which bring in necessary light and ventilation and protects the building from the harsh southwest sun in summers. The front elevation is glass façade with coloured rectangular slabs and blocks in similar colours as present in the entrance of the old High Court building. A direct psychological connection is established from the existing high court building as one see’s the coloured columns and parasol roof in a refreshing form in the new building. The north side of the building has a similar elevation to the plaza side as it is in the south side minus the louvered effects of the vertical triangular columns and horizontal baffles which makes the glass façade more inviting and integrated with the new building. 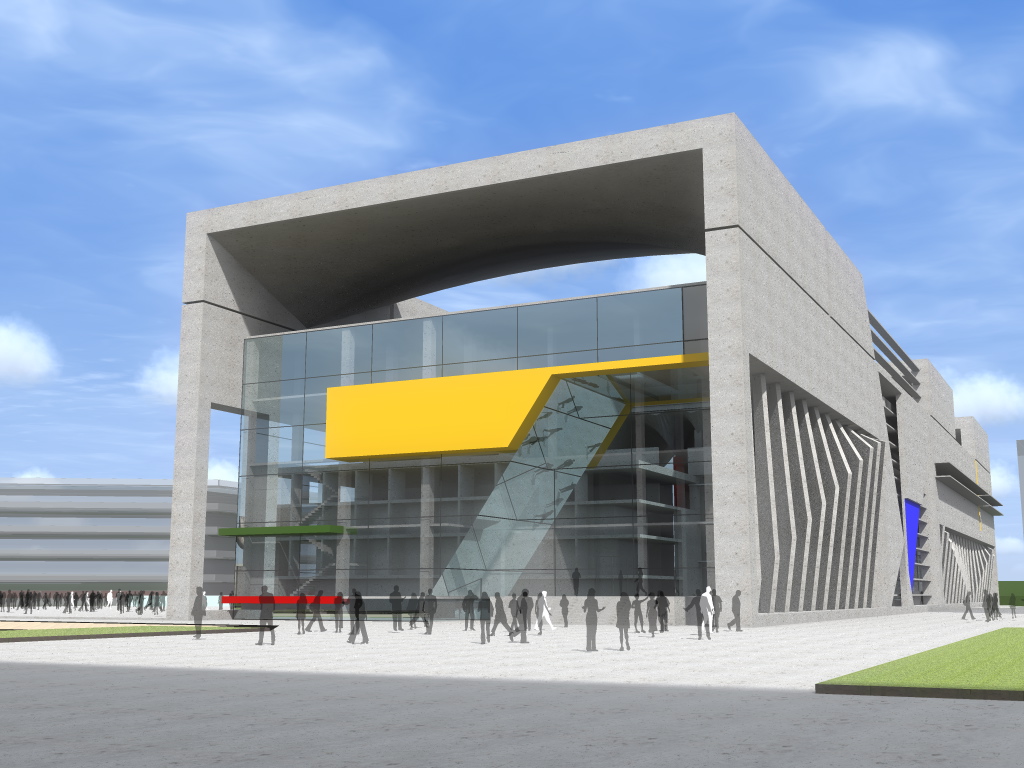 The site connections for the new building not only has to be just with the old original high court building but also from the new Y shaped 60 court building built in early 90’s. A pedestrian plaza with no vehicle zone is preferred for the new building with connections to the two former court buildings through the plaza or the new underground levels created with the building. The main entrance of the new building is from the basement level where the vehicles as soon as entering the court complex are directed to. The general public has three levels of parking with a facility of 1500 cars and 400 two wheelers. Special parking zone has been established for the judges with private connecting corridors to the old high court building. Pedestrian movement is given utmost importance as various nodal points emerge from the underground parking to the main plaza area. Connections from the parking levels are given through escalators to the plaza and through lifts and staircase to the upper floor of the building. 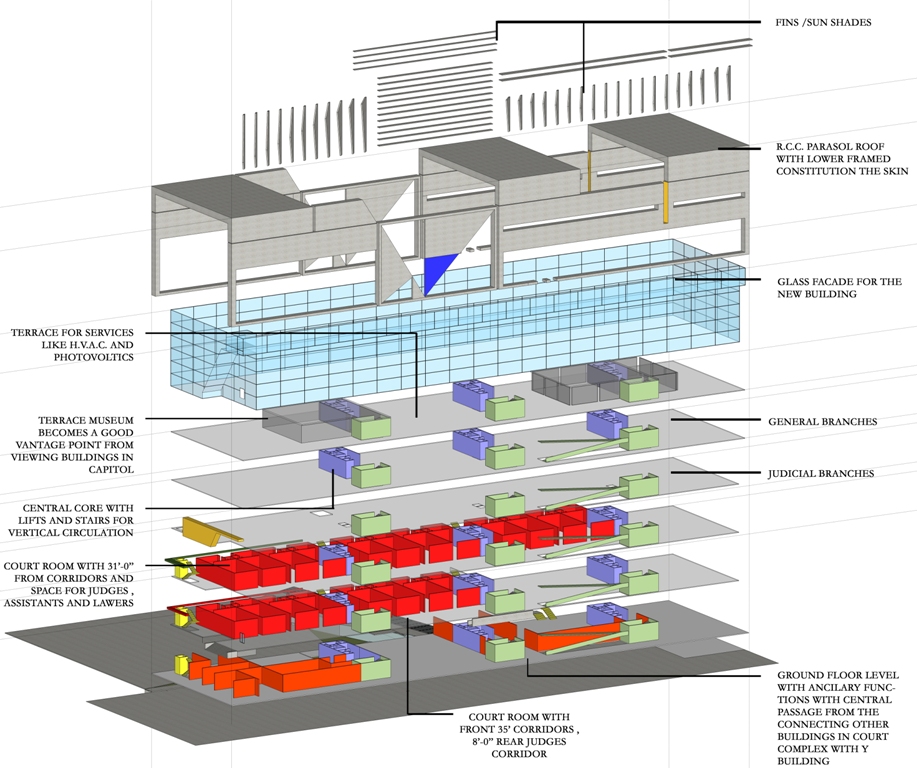 The building plan is rectangular and constitutes of 5 floors. the building is divided into 3 central cores which take care of the vertical movements and 5 floors which have all the establishments. The ground floor is subterranean which means it is half underground and partially above the ground, this is done to house areas like services, servant quarters, examination halls advocates association etc. at this level one arm of the building extends towards the Y – building which is also subterranean and houses all the facilities required by every user visiting the Court Complex. Areas like cafeterias, oath commissioners, stamp vendors, banks, post offices etc are all put in this area which through its sculptures form and proper natural lighting will become the lifeline of the complex. The first and the second floor are most important and house the court rooms. The first floor has 8 courts and the second floor has 12. A main entrance with an angular porch and steps from ground level to the first floor highlight the front façade. A 35’ wide public corridor forms the front side of all the courts where as the rear side is flanked by an 8’ judges corridor. The third and the fourth floor house the judicial branches and general branches. The semi covered top floor has the museum on the north end under the first arch, and employees usage areas under the rear arch, the middle arch area and its open spaces have been kept for various services like HVAC and Solar Panels which will be there in plenty as the building will try to be as energy sufficient as possible.

The materials to be used carry a lot of importance for the building as it the past and the present of our country with an eye on the progressive future. The parasol roof and side walls are constructed in Roller Compacted Concrete (which uses a mix of fly ash and cement and not just cement to form RCC) to match it with the existing concrete in the capitol complex and also to validate it as a material which casted with modern techniques can give the best quality of finish to be found in the world and hence showing the progress of the country. The inner skin of the building is glass with aluminium frame. The building inside has to be alive by breathing in and out and so the skin of the building will be openable. Use of colours and motifs in the concrete has to be directly borrowed from Corbusier as the relevance of both has not diminished with the passage of time. 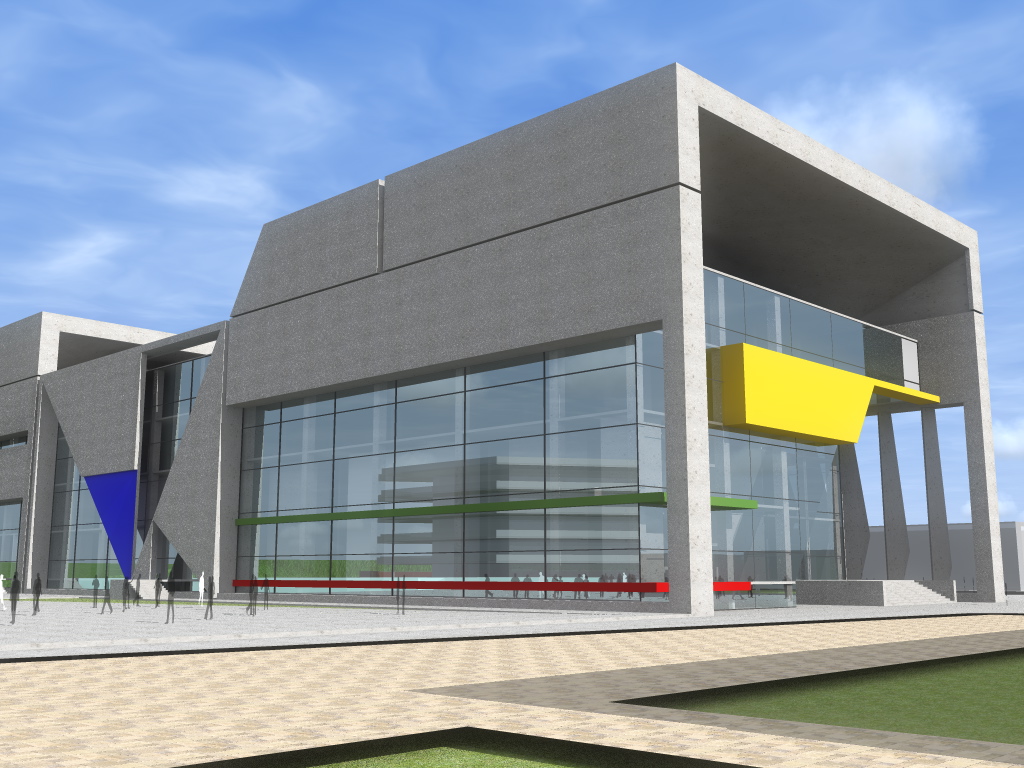 In this modern world efficiency of energy is like a very basic requirement for any building hence following GRIHA norms would help the building attain major requirements in fulfilling its energy needs. Ground water replenishment, use of Roller Compacted Concrete (RCC) which contains reasonable amount of Fly ash and reduces the use of water in concrete, optimize energy performance of the building by use of sun breakers on south and southwest sides to prevent excessive heating of the building and openable glass skin for more natural ventilation, softscape building periphery so that heat gains are minimized through refltive surfaces especially concrete, use of photovoltaic’s not only to generate hot water but also to generate enough electricity to sustain the energy requirements of the building fully or partially, reduce water consumption of the building and reuse treated water for irrigation and other purposes.